Surplus Food to Those in Need

How easy is it to share your surplus produce from your garden? Spread the word and get your local food pantry registered. Even if you're not a gardener, you can be the conduit for excess food to meet up with those who need it!
Nearly 15 percent of American households have difficulty meeting their food needs. A new study shows that NZ Superannuation payments aren't enough to live on. Many people are short by $30-plus every week. Those who rely on food pantries are often surviving on canned and
processed foods.
Ethical Food Shopping

Maggie Berry reports that , "There is now a noticeable shift back to growing our own vegetables. After a lean few years of a gardening downturn, garden centres happily report a huge surge in sales of fruit trees, seeds and vegetable plants."
Statistics New Zealand reports that the prices for fruit and vegetables rose 18% in 2008, with the cost of lettuce rising nearly 140% and broccoli 110%.
The overall increase in prices in the past few years has provided another incentive for people to grow their own produce. The New York Times report that seed and produce companies have not seen such an interest in growing food at home since the rampant inflation of the 1970s.
Simon Thompson, sales and marketing general manager for Zealandia, one of New Zealand's largest wholesalers of plants and commercial seedlings, says the edible-garden trend is “very big. Products are just going out the door, which is a good sign, really – it’s telling me that people are wanting to grow their own food and they also want to know what’s been sprayed on it.” Click here for Sustainable Living information in Auckland.
With 41 million U.S. households growing fruits and 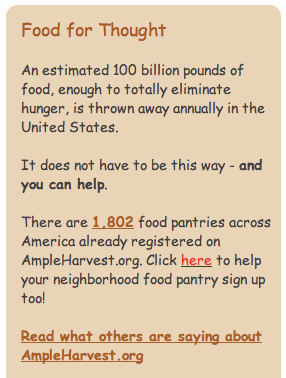 vegetables, there ought to be more sharing between the haves and the have nots.
"Whether it's a hanging tomato plant off your apartment terrace, or a garden ... or whether you run a farm, we all have food that's left behind," Gary Oppenheimer said. "That's the food that ... we can get into the system to help diminish hunger in the country.

"Nearly 2,000 food pantries across the United States are now registered on the site AmpleHarvest.org
CNN Reports: In 2007, Gary Oppenheimer had a backyard garden produced a bountiful harvest with a surplus of spaghetti squash, melons, pumpkins, tomatoes, peppers and cucumbers for his family. At the end of the season, Oppenheimer had 40 pounds of excess fresh produce -- and nowhere to take it.
"Nobody wanted more," he said. "My wife wouldn't let me bring any more in the house, and I didn't want it wasted."
Oppenheimer took the fruit and veggies to a local food pantry at a battered-women's shelter. When he dropped off the food, he was thanked profusely. "As I left she said, 'Now we can have something fresh to eat,' "
Oppenheimer recalled. "That stuck with me because I remember walking away thinking, 'What? They have canned stuff only all the time?' "
The experience led Oppenheimer, 57, to create a way for gardeners across the country to easily share their excess produce with hungry families in their communities. He learned that toward the end of the summer, plots were often abandoned and good food was sometimes left to rot.
He tried to find a list of his town's local food pantries online where the extra produce could be donated. A Google search showed the nearest food pantry was in another town, 25 miles away -- when in fact there were six food pantries in Oppenheimer's town of West Milford, New Jersey.
Oppenheimer knew he had stumbled upon a gap in information that could rescue fresh produce from a wasteful end and potentially save lives."I realized that if I'm having this problem as a gardener, then other people across the country must be having the exact same problem," he said. "I got up the next morning, and I went on the internet, and I grabbed the domain of AmpleHarvest.org."
See what networks exist in your community, or create one. It's a simple social justice initiative that we can all participate in.
food hungry justice poverty

jist, gist or gyst? And how to say it?

Main Entry: gist Pronunciation: 'jist Function: noun Etymology: Anglo-French, in the phrase laccion gist the action lies or is based (on), from gisir to lie (of process), from Old French gesir to lie, ultimately from Latin jacere : the ground or foundation of a legal action without which it would not be sustainable The word is spelled "gist." It comes from the French word "gesir," a verb meaning "to lie." In 1688, the word entered the English language as a legal term, in the sense that something "lies in the center" or is the heart of the matter or case. It remained a legal term only for a number of years before it was adopted into general usage, explains Ted Nesbitt. In 1823, Corbett used the word in writing for the first time in a non-legal sense. "This is the gist," he meant "This is the heart of the matter, or this is the central focus." So, the word has come to mean the very heart of something, parti 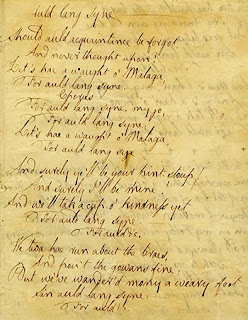 " Auld Lang Syne " (Scots pronunciation: [ˈɔːld lɑŋˈsəin] : note "s" rather than "z") is a Scottish poem written by Robert Burns in 1788 and set to the tune of a traditional folk song ( Roud # 6294). Robert Burns sent a copy of the original song to the Scots Musical Museum with the remark, “The following song, an old song, of the olden times, and which has never been in print, nor even in manuscript until I took it down from an old man". Some of the lyrics were indeed "collected" rather than composed by the poet; the ballad "Old Long Syne" printed in 1711 by James Watson shows considerable similarity in the first verse and the chorus to Burns' later poem, and is almost certainly derived from the same "old song". It is a fair supposition to attribute the rest of the poem to Burns himself. See lyrics, comparisons, adaptations and pronunciation at Wikipedia. There is some doubt as to whether the melody used to

Pulling out of a parking spot on Tuesday I saw a woman go down, and she went down hard. I pulled back in to the car park and ran to assist. I held her umbrella over her as she cradled her right wrist. Between the slant of the pavement, the flow of rainwater and her very fashionable boots, she was a recipe for disaster as she approached her gym for a workout. She was to have competed in national rowing championships in September. Yesterday I rain across the street, trying to dodge between the rain drops which probably caused me to collect more than my fair share. As I stepped up onto the curb, a parking slip flew past my legs, followed closely by a woman who had just paid for it, but who couldn't grab it from the machine before the wind did. I turned and joined the chase, doing pirouettes and crazy lunges; the ticket seemingly devious in its avoidance of us both. We eventually nailed it, but only after we had both seen the comedy in the situation. Having settled into my seat at th